Ya’ll, I am tired. It’s been really good, but I am done. Except I can’t be done. We’re only getting started.

It all began on Wednesday of last week. The cooking frenzy that produced our Thanksgiving feast commenced late in the afternoon. I was supposed to have “early release” from work, but I worked from home. That means I was sitting at my laptop long after the release time, conveniently jumping up on occasion to do a little something toward meal preparation…you know, like hoisting a twenty pound bird into the brine that would transform him into a culinary masterpiece. (Alton Brown is my hero.)

As we headed to bed, I grabbed my phone to double check turkey roasting times. Our feast was set for 1:00 and I never want to relive my heritage of Thanksgiving meals not yet served well into the evening because the huge bird was still in the oven. Back in the day when we celebrated Thanksgiving at my parents’ house, by 7:00 p.m. the obligatory relish tray had been devoured and it was always closer to 9 when we finally ate. When I realized that in order to cook and carve that bird and still have time to do the last minute meal preparation I would have to be up at 6 a.m., I was mad at the turkey.

Fortunately, I woke after a good sleep with a better attitude toward the dead bird that was soaking in a salty sweet bath in the fridge. It WAS Thanksgiving after all. And as it turns out, it was a day that I won’t soon forget.

Our family, like many, has experienced divorce. It is the hardest, most gut-wrenching experience of my life. I’ve buried my parents and three siblings. I’ve been bankrupt and lost my home. I’m not speaking from a soft life.

I’ve also, through this devastation (and don’t let anyone tell you there is not physical, emotional and spiritual fallout – they lie), experienced the grace of God in ways that I cannot explain.

Thanksgiving was simply awesome and I have no idea if the food was that great. They said it was, but they are after all, my family. The best part of the day, the part that made my heart the only muscle on my body that wasn’t aching at the end of it all, was the part where two of my children – the one born to me and the one who married into this family, filled our home with grace and peace. 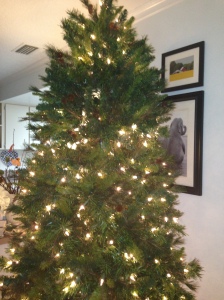 While I would have loved to just pitch a tent and bask in the glow of that all weekend, I had to move along. On Saturday I returned home after running from event to event the entire day to find that my dear hubby had unpacked the brand new Christmas tree, a floor model purchased on clearance last year after Christmas…cause that’s how I roll. There it stood, naked and with a strand of lights refusing to shine. I spent the next hour “fluffing” the branches, changing bulbs and trying to get that dark strand to shine to no avail. I fought the tree and the tree won. I bought a strand of lights. And as I write, I’m staring at that naked tree, and wondering when I will find time to decorate it. If I’m not careful, I’m already over the holidays. I am mad at the tree.

It’s November 30th, my friends. Something is wrong with me. I’m already hopelessly behind; hopelessly worn out and hopelessly insufficient.

I close my eyes. Forget the pile of pumpkins just over my shoulder, waiting to be stored away until next year. Don’t mind the naked tree or the to do lists. It’s all distraction.  This is the beginning of Advent.

Advent. And the first candle of advent? Hope. Hope moves us forward. 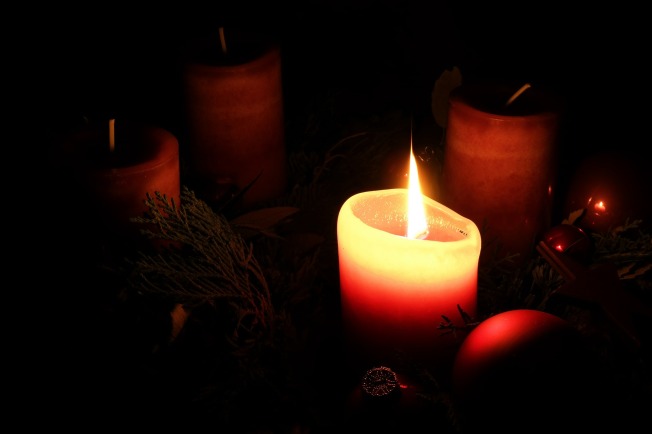 Hope comes over anxiety like a weighted blanket, soothing and reassuring as a hug. Yet hope seems lost in the news, in the doctor’s office waiting room, in the bank balance, in sorrow, in the demands of life.

In the quiet of my mind’s eye, I try to picture the first Christmas, the beginning of hope.

Mary and Joseph no doubt encountered heavy traffic and grumpy people as they walked the dusty road to Bethlehem. Mary rode part of the way on the back of a donkey, I suppose. I’m sure that was spiffy. It was so crowded that the teen mom gave birth in an animal stall (apparently Joseph failed to reserve the birthing suite at the local inn); she wrapped her infant son in cloths. I assume no one gave her a monogramed Aden and Anais blanket, either. As I think about that night, I imagine the smells and the sounds that surrounded the birth of our savior. We like to picture an angel choir and that is glorious. The black sky was filled with tiny stars, the air in that barn was filled with the pungent odor of animals, and there was a fire burning for light and warmth. Most likely people all around were cooking meals and managing the mundane as Mary pushed the savior king into the rugged hands of Joseph. That was the first Christmas. Unpretentious, natural and even gritty, yet the heavens were filled with the songs of angels as hope entered the scene.

I open my eyes and look around again. The lights on the unfinished tree cease to mock or accuse me. Instead they remind me of the Bethlehem sky that night when in the midst of the mundane and the routine, the keeping of mandated schedules and ordinary activity, heaven opened to announce the birth of Hope.

I have a three year old grandson who always wants to share in the good stuff, and trust me, nothing gets by him. Whenever anyone has a snack or a drink he chimes in “Me-ah Too-ah!” “Me have it!” This Christmas season, I’m going to take a lesson from him. In the midst of grumpy people, well-traveled roads and mandated schedules, I’m reaching up for my share of hope. Me-ah too-ah, Jesus, Me-ah too-ah.

May your Christmas season be filled with the hope that is found in Christ alone.