Way back in the 1960’s when I was in elementary school the Johnson administration established the Presidential Physical Fitness Award. To test for the award, students completed a softball throw, a broad jump, a 50-yard dash and 600 yard walk/run.

Imagine a skinny little girl wearing black eyeglasses pulling back to throw her hardest, only to drop the ball behind her back. That would be me.

I developed a “stitch’ in my side before the end of the 50-yard dash and the 600-yard run/walk was excruciating.  Although I was an active kid, I was more of a sprinter than a distance runner. And by sprint, I mean to the end of the twenty foot sidewalk in our front yard where we played kickball for hours or to the ice cream wagon as it passed down our street.

As an adult, I talk about getting in better shape. In fact, if talking were an aerobic activity I would be in awesome shape. I convinced myself that I would eventually find the time and energy to devote to a more fit physical body, but it never happened.

Then I got a Fitbit. I synced it up with my iPhone and found some friends. I had no idea how much my life would change over the next few weeks.

For the first few days, I was content to get to know my new device, privately counting steps. The American Heart Association recommends ten thousand steps each day. Let’s just say I was significantly south of that.

I decided that I would strive for the recommended number and began looking for ways to “get my steps in”. I had no comprehension of the dark labyrinth of step counting compulsion.

I have a sedentary job so I added a stroll around the building midday and gained several hundred steps. I vowed to walk the five flights of stairs at least once a day.

Still straining toward my goal, I sensed my purple friend mocking me. I spoke the words aloud for effect. “This device is designed to serve me; this routine will bring me joy, not condemnation!” I had increased my activity and I was content.

Or was I?  (For full effect, read that with an evil, echoing voice) 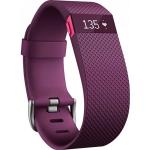 The bulky purple band had replaced my lovely rhinestone studded wristwatch. At first, I glanced at the beautiful watch as I dressed each morning and thought, “Later, baby. I’ll take you someplace nice later. It’s just that I need to count my steps. I’m in a different place right now…you understand, right?”

It never happened. What good is walking if my steps aren’t counted?

We began walking every evening as a part of my hubby’s recovery from spinal surgery. Little by little, we increased the distance. Before we knew it, we were walking three miles. The first time that band vibrated at the ten thousand step mark was a milestone and I was hooked.

The challenges seemed innocent at first.  I was walking miles every day and I was confident that most of the people challenging me were not hitting the trail for a (by then) four mile walk every evening. For the first time in my life I felt like a competitor.

But winning has been elusive. As I sync my band to the app throughout the day, I gain a lead from time to time. But at the end of the day, the coveted “Workweek Hustle” virtual trophy slips from my hands. The screen on my phone lights with a mocking message, “Friend A just zoomed past you for the lead”.

I’ve obsessed over steps that “weren’t counted” because I was pushing a stroller or a shopping cart. I pay closer attention to the battery indicator on my Fitbit than on my smartphone. I have secret doubts about the legitimacy of others step counts (seriously, what is wrong with me???) I might have a problem.

It’s as if I developed a stitch in my side just short of the finish line. I am disappointed and frustrated over losing challenges. Apparently, I’m not only competitive but also a sore loser.

So I venture out to walk again, this time alone and with no more agenda that to listen. A quiet whisper reminds me that the greatest steps I will ever take are those that bring me closer to eternity with Jesus.

The only trophy that will last is offered for all who make the finish line.

The feet that bring the Gospel are beautiful.

All good athletes train hard. They do it for a gold medal that tarnishes and fades. You’re after one that’s gold eternally. I don’t know about you, but I’m running hard for the finish line. I’m giving it everything I’ve got. ~ The Apostle Paul, 1 Corinthians 9:25-26

There isn’t a category on the dashboard of my Fitbit app for transformation of my spiritual heart, but it’s as real and impacting as steps counted and calories burned are to my physical heart. He knows; he sees my struggle and my determination to never give up on the daily work of denying my flesh and choosing to walk after him.

Meanwhile, I’ll catch you later. It rained today and we couldn’t walk so I’m going to go run around my house until I get my ten thousand steps.

May all your steps be counted…